Conversations of Consequence: Gold Awards That Lift Our Communities 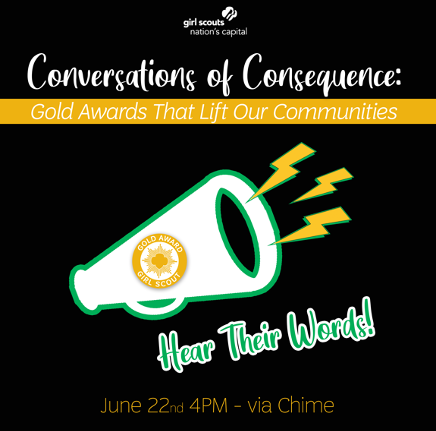 Over sixty Girl Scouts community members signed on to their computers on Monday to come together for an inspiring and moving panel on girlhood, justice, inequity, and how four Girl Scouts affected big change while completing their (equally big) Gold Award projects. Natalie Ludaway, former Chief Deputy Attorney General of the District of Columbia and Girl Scouts Nation's Capital Board Member, moderated the conversation. You can view the presentation shown here.

First up: Justice Marshall. Marshall joined Girl Scouts as a Daisy and, as Ludaway put it, "When you have a name like Justice Marshall, you are prone to equity, fairness, and doing the right thing." Marshall completed her Gold Award project, titled "Know Your Rights: Policing in the African American Community," in 2018. "At the time, we had just lost Stephon Clark to police brutality," Marshall explained, "and I really just wanted to focus on the negative stereotypes associated with minority students and law enforcement officers and build a…line of communication between the two." Ludaway asked Marshall how she felt about the recent protests against police brutality that have spread across the world. "If there was a way for me to do my project every year in every school, I would do it," Marshall said.

Next up was Sydney Carr, who started Girl Scouts as a Brownie. She titled her Gold Award project "Architecture Is 4U." "As I was in my senior year of high school," Carr said, "I did want to go into the field of architecture, but knowing the stigmas with architecture, knowing it is a white, male-dominated field, I wanted to be that difference as a woman going into that field as well as an African American woman going into that field. And I wanted to inspire others and encourage others to do the exact same." Carr said she attributes a lot of her "stick-to-it-ness" to her experience as a Girl Scout. Today, she's pursuing architecture and construction management in college – where she's the only girl in her class.

Along a similar vein, Khaya Yankey's Gold Award project, "Women of Color, Strength, Beauty, and Intelligence," connected young girls with mentors and focused on health, education, and self-worth. "With my project," she said, "I just really hope to empower women of color, a group that I personally feel is often left out of important conversations about ambition and success." Ludaway asked Yankey what she learned from her project. "The biggest lesson I learned was how important it is for young girls to have mentors who really reflect them," Yankey said. "Being able to see someone who's accomplished a lot in their life and who looks like you, it just gives you hope and makes you believe that you can be in that place one day yourself."

And finally, Danielle Baker. Her project, "Young, Beautiful, Black Girls," focused on helping young girls identify and understand depression, providing them with lifelong tools for coping, so that, as Ludaway put it, "they aren't defined by depression." "The topic of depression isn't really in the media," Baker said. "There are 1.9 million children with depression, but there are no statistics for African American women – also girls. I feel my project is starting the conversation." Baker also offered encouragement for younger Girl Scouts. She said Girl Scouts even helped to inspire her to pursue a career as an American Sign Language interpreter. "I believe Girl Scouts just shows so much leadership and discipline," she said. "Being in Girl Scouts … I learned so much about my community, friendship, relationships, and also, from my project, I learned that you can select a topic that's personal to you and use the information to create change."

Following the introductions, Ludaway opened up the floors to questions, allowing for a very honest conversation. The panelists discussed tips for younger Girl Scouts thinking about their Gold Award projects, why it's important to stick with Girl Scouts, and how they see themselves continuing to impact their communities. "All the work you do while you're in your troops really helps you see how other people live and how much you can really help other people and how much you can do for your community," Yankey said, "even though you're just one person, just one girl." Despite the screens in between all of the young women, the conversation felt intimate, especially when the panelists candidly discussed moments they felt like quitting and how they got through times of great difficulty in high school, as well as the real definition of "success" and the importance of finding the right friend groups.

Echoing other panelists, Marshall said her favorite memories of being a Girl Scout were those when she was outside, having fun, and "causing trouble" with her fellow scouts. Now that she's in college, she's enjoying living vicariously through her little sister and watching her participate in Girl Scouts – gathered together over video chat rather than in person, for now. "I think it's amazing how you can see Girl Scouting change through generations," Marshall said, "and still remain the same." 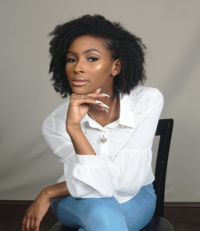 During her senior year of high school, as she was finalizing her gold award project, Sydney Carr was also planning for her future. Specifically, she was figuring out how to navigate the industry of her dreams -- architecture.

Khaya Yankey describes her gold award project as being like a “sisterhood.” She orchestrated a symposium titled “Women of Color, Strength, Beauty, and Intelligence” that focused on health, education, and self-esteem. 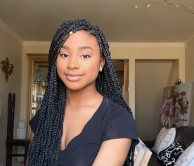 Danielle Baker’s gold award project centered around educating young Black girls, ages 8 to 10, about depression, equipping them with the tools and resources they need to find emotional support now or down the road.